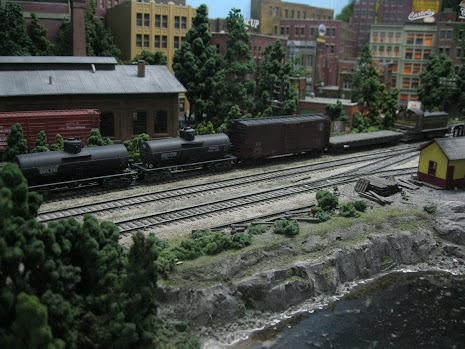 In the image above we see the local North Dover crew having blocked traffic for this train.  Moments earlier, they pulled the required freight cars dispersed in among the lines of cars located along the two major sidings in town.
Click on the image to enlarge it and click outside to return to the default setting. 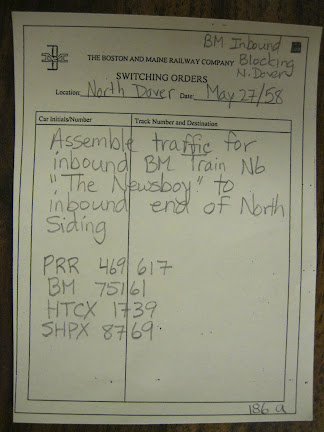 The switching order for the local crew indicates the cars to be found in the yard and blocked. 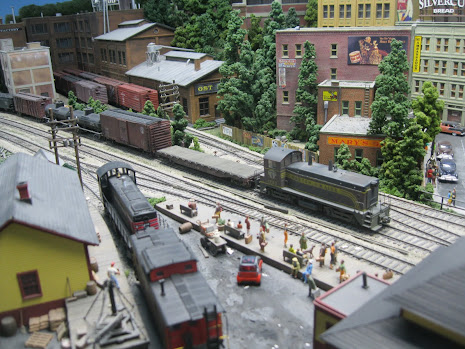 They've placed the cut of four cars to the "inbound" end of the North Siding in town.  This will allow "inbound" Train N6's crew ease in lifting the cut onto their train before they set out some cars from their consist for North Dover. The switch crew verifies the cars with their switch list.  A Pennsy flatcar, a B&M boxcar and two tankers all with proper identifying marks. 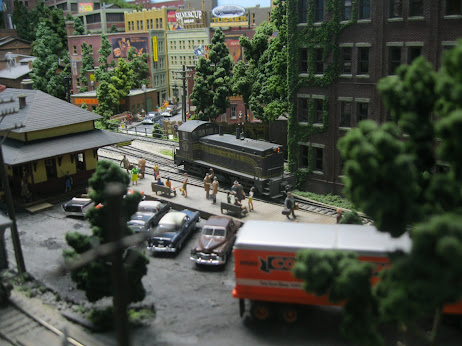 With the block of cars in place, the local crew moves their locomotive out of the way. 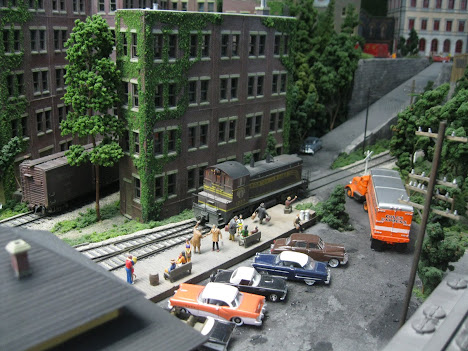 They will park the switcher on the South Siding in short order. 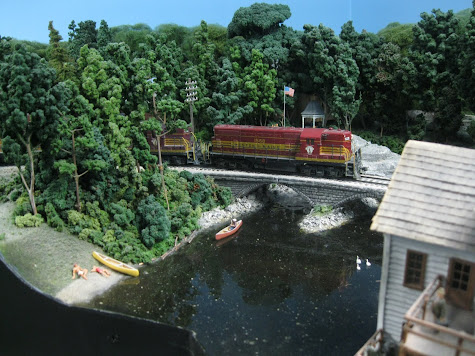 In due time, Train N6, "The Newsboy" approaches town. 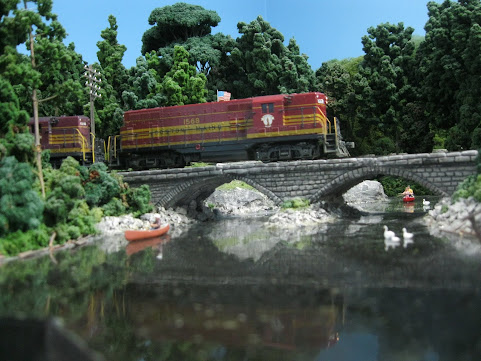 The train crosses Stanley Bridge over the Salmon River. 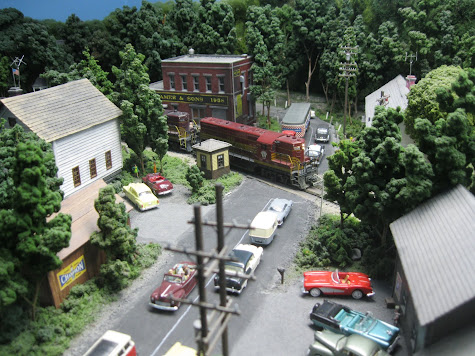 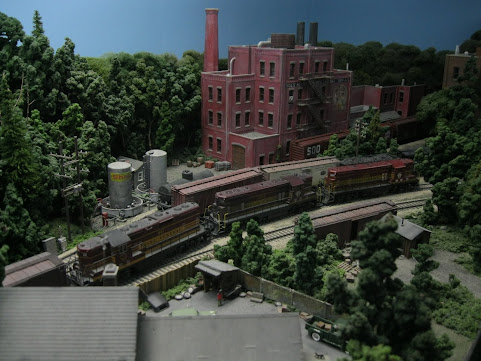 They round the big curve in North Dover with the Holy Spirits Distilleries complex towering above the yard.  (Due to selective compression on the model railroad, the mainline in North Dover, along with its two sidings (aka service tracks) act as a yard for the local switcher when dispatch indicates no incoming trains. 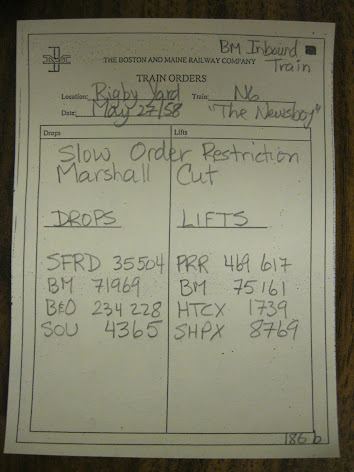 The train orders for the crew of N6 "The Newsboy".  It will determine their moves upon arrival at North Dover which is their only stop en route between Rigby Yard in Portland and Lowell Jct. outside of Boston.  The train orders indicate which cars the crew will drop (set out) from their train and which cars they will lift from the town.  Note the Slow Order Restriction they must observe at Marshall Cut.  Our train orders tell us our first drop is a Santa Fe reefer, so the model railroad operator will be looking for this car in the lengthy consist. 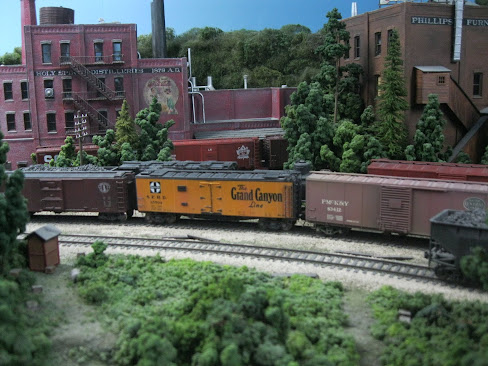 We locate the SFRD reefer which we have determined to be the first car in the cut to be removed from the long manifest freight. 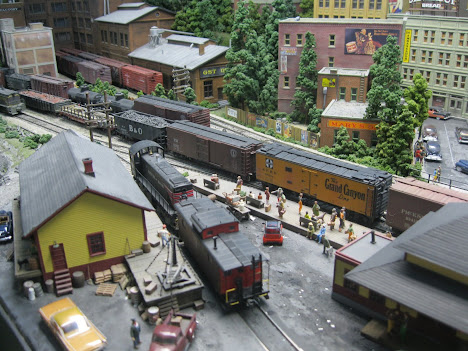 On this day, the movement will be an easy one with four cars being set out and four lifted. 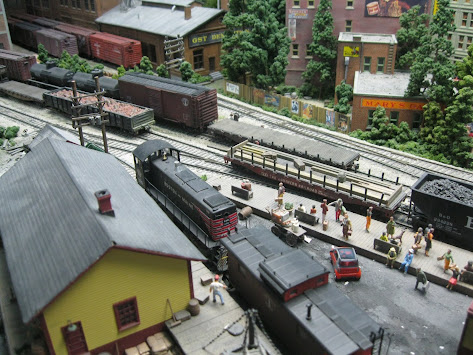 The cut is made behind the Southern flatcar which is the final car of cut of "set outs" from the train. 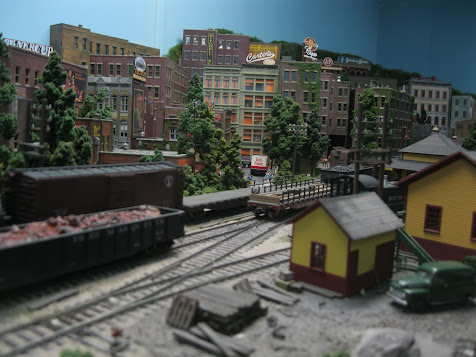 The gondola of scrap metal to the left heads up the remainder of Train N6 while the crew pulls the train ahead of the turnout for the siding.. 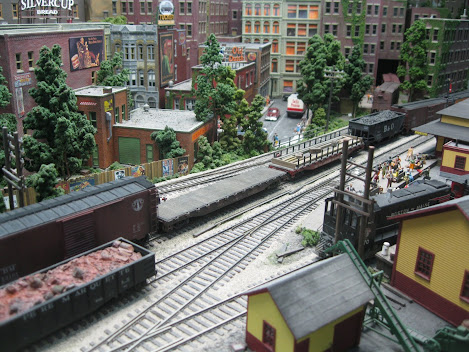 The engineer guides his train on to the North Siding where they have grabbed their lifts. 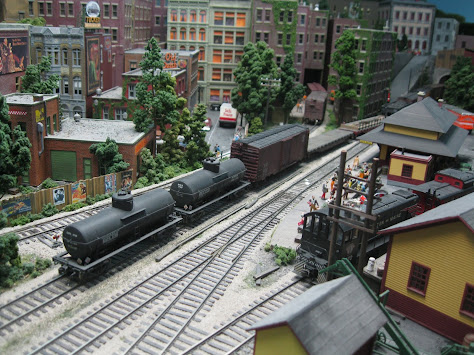 They pull the lifts from the siding while still holding on to their set outs. 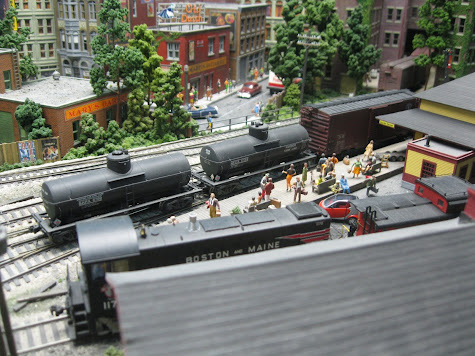 They bring lifts along the main to the rest of the train. 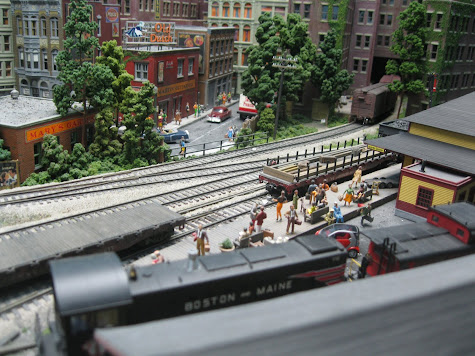 N6's crew then uncouples the setouts from the train once again. 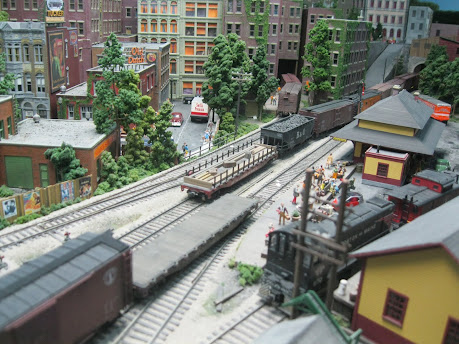 They spot the set outs back on the North Siding. 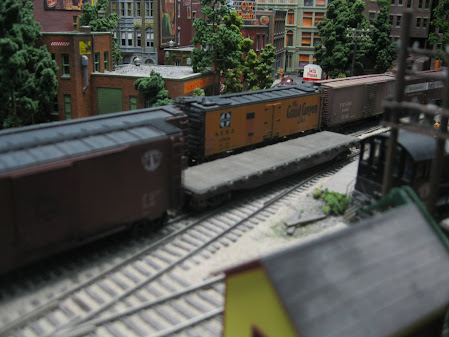 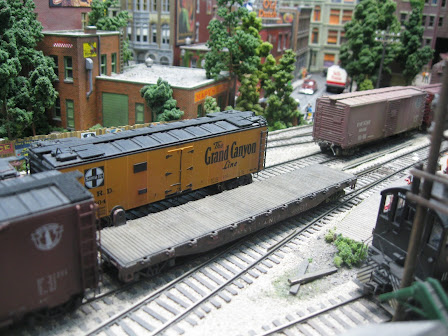 Set outs complete.  The crew uncouples to head back onto the mainline to pick up the remainder of their train. 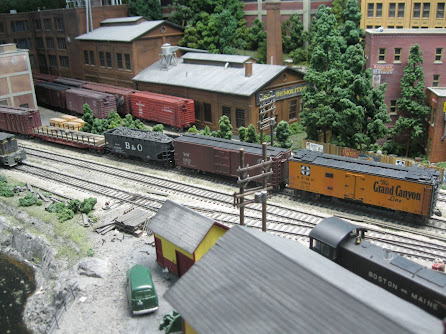 N6's crew verify their set outs with their train orders.  A Santa Fe reefer, a B&M 40' boxcar, a B&O hopper with loads and a Southern flat with all identifying marks corresponding. 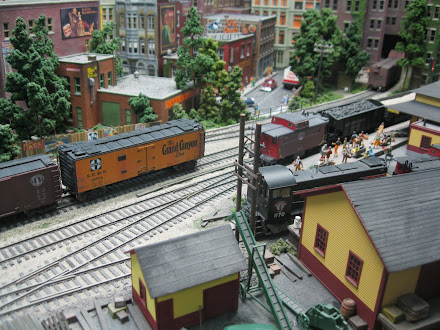 The crew of N6 has performed their brake test and are now underway. 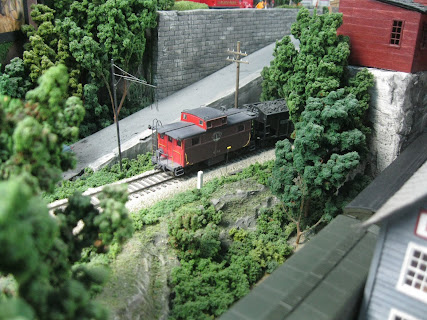 We say good-bye to the buggy as the train enters the tunnel beneath the main street of town.  In an hour or so they will arrive Lowell Jct. outside of Boston.
Thanks for checking in on B&M Train N6 "The Newsboy".
All the best, Mike Hamer, Ottawa, Ontario, Canada
Posted by Mike Hamer at 4:41 PM

Thanks, George! Great hearing from you!
Yeah, I've been totally busy in model building for others and playing in the musical bands.
Still teaching as well!

All the best to you!
Mike

Great little post. As I was getting started in operating about a year ago I found the videos you made with Chris Lyon on your layout to be particularly helpful, one of them following The Newsboy. They laid each train's tasks out clearly and succinctly, with a little color too -- very helpful for a newcomer. North Dover looks like a nice town to operate in. Thanks for those and for posting this!

Thanks, Adam. I just visited your blog. Your layout is coming along beautifully as well. For sure, operations really brings a model railroad to life! All the best, Mike Hamer, Ottawa, Ontario, Canada